Nassau 2013: On learning to fight for the kids we love

One of my students has started compiling stories and pictures from his teammates with the intention of putting together an anthology of our experiences in Nassau.  I love encouraging students to write, and I'm so proud of this year's team.  Here's my first stab at something to include in the anthology:

Mismatched sandals she calls slippers flop on rough terrain strewn with broken glass as she trails behind the bigger kids. Year after year, I watch them grow.

One who used to be our constant shadow, now elusive as he runs with a tougher crowd--bigger boys who trade in school for the shelter of the neighborhood gang. I see him only briefly, his once-sparkling eyes now hollow and lost. He hardly looks at me, hardly smiles that had-me-at-hello grin. Who will protect him, this darling boy who used to be protector of the little ones?

His younger brother smiles wide as ever, reminding me of the first PB&J we ever shared, the one he thanked God for in a beautiful 8-year-old prayer I wish I could remember by heart. He still greets me at the door with a shout and a toothless grin. He comes and goes more now, but still wants to play, still wants to talk. I ask him if he is studying hard, choosing good friends. "Yes ma'am," he says, meeting my eye. He tells me of his dream to go to the States. When we part ways at the end of the week, he hugs me long and hard, and I wonder how long he'll be little-boy enough to shamelessly hug the white woman who brings all her friends.

Another, the goofball of the family, looks at me with dancing eyes that promise mischief. He wears stolen sunglasses and a bandana tied like Bo peep's bonnet, making us all laugh. He answers to no one, not even to me, but looks out for the littler kids. He lies about having already had a snack and shares with a hungry neighbor. He runs ahead of the group and grins when I call him, weaving back and forth to keep an eye on us.

Their neighborhood friend has moved out of her family's plywood shanty and into one of the richer looking houses across the street. Some of the girls take me there reluctantly, saying she never comes out to play anymore. They tell me she lives with Ms. Rose because her momma kicked her out for being sassy. Ms. Rose beats her, they say. When she joins us one afternoon, she gives me her usual pout until I talk her down and tell her I've missed her and that we are going to have the best day. Finally a smile, and I cringe, thinking how they try to squelch her spirit. She is hard-as-nails to protect what they have tried to take from her. Later she comes climbing up the ladder to find me on the roof. I sternly tell her to get down, that I will find her in a few minutes. If only I had known it would be the only day we'd have all week, I'd have sprinted down and snuggled her so tight and never let go. The next day, Ms. Rose refuses to let her come and my heart is in my throat and I am imagining what is happening in that drug-lord house with its drawn blinds and all its secrets.

Her sister/cousin/friend--I only know they used to live in the same white shack--asks me about Connecticut, wants to know "is it fun there?" I laugh and tell her Connecticut is boring, that I love the Bahamas best. She says cable TV would make it fun here. I tell her I don't have cable either, and she stares at me in disbelief. "Connecticut is boring," she repeats, even and convinced. "I can come with you?" The next day, her voice on the other end of the phone shatters my foundation, leaves me reeling. I nearly double over as she tells me her momma has said she can come home to live with me. I stand there for what seems like forever, not speaking, evaluating my life and everything else I know, trying to think of an answer that will explain to a 12-year-old what I don't understand myself: why I have to leave her here. why life isn't fair. why some people live in shacks and others live in mansions. Gritting my teeth I tell her I can't take her with me. Promises to visit next year that used to seem adequate fall desperately short now.

The little one looks up wide-eyed--eyes that already have seen too much. She is obeying more than five days ago. We have made progress with this barely two-year-old wonder who was all backtalk and curse words and running out in the street at the beginning of the week and all smiles and snuggles and "yes ma'ams" at its close. The light in her is so bright, this half-pint fierce and full of daring. I wonder who she will become. Childhood slips away too quickly here; the others have taught me there's not much time.
Posted by Chelsea at 10:24 AM No comments:

Nassau 2013: On foiled plans and the God who works for our good

To say this week got off to a slow start would be an understatement.  On Monday, Pastor Joseph was stuck in Haiti (typical), the lay leaders we trained in April to run VBS were not able to get to the church, the supplies we needed to begin roof repair didn't turn up, and we had a bit of a snafu with another group about how to merge our ministry in the same neighborhood.


Basically, all of my plans were foiled. So trusting that God had some different ones, we set off for Carmichael Church on Tuesday for our second day of work.

My students planned a VBS lesson to use if the Haitian leaders didn't show again (they didn't), and we reworked our plan with the mission team that came to serve at Anna's house, a neighborhood where my students and I are also deeply invested. The day was going more smoothly as our roofing supplies arrived, and I was able to put our two male leaders, Codi and Andy, on the roof with three of my trusted roofing pros, students from last year's team Neil, Steve, and Adam.  They began ripping up rotten plywood on the roof and were treading carefully on the rafters below.

Time stood still as two students on the ground ran to tell me to come. When I arrived in the bathroom where Andy had fallen, Codi was already there and Steve had sprinted to get the first aid kit from my backpack. Our friends Lauren and Nate from Mission Discovery rushed to our site and Nate and I headed with Andy to the ER.

I'm writing this as we're back in the hospital today after some harrowing complications with the injury and the care he received initially. {{Parents, take heart knowing that your students are safe and enjoying a great team debrief day we had planned for them! I popped in while Andy was in surgery and we had a sweet time of prayer on the beach.}} 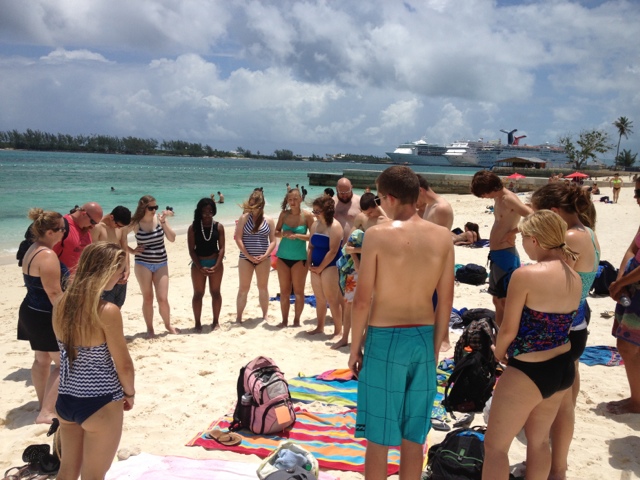 Amazingly, until this morning, Andy had been up and walking around, joining us at Carmichael to play the drums and give the Haitian kids lessons. 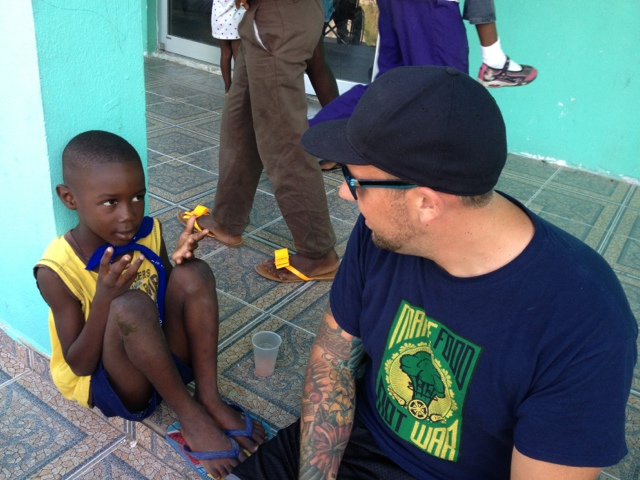 The whole experience has reminded me of a story about another guy who came down through a roof.

Jesus was teaching from a private home, and the place was so packed with people who wanted to hear from the wise Teacher that no one else could even squeeze through the door. Four friends wanted to bring their paralyzed friend to Jesus, trusting that the Teacher would heal him. In desperation, they removed the shingles and lowered him through the roof.  In his account, Mark records that upon seeing the faith of these men, Jesus told the paralytic that his sins were forgiven. After saying this, Jesus discerned that the scribes were questioning his authority in their hearts.

So he asked them, "Which is easier, to say to the paralytic, 'your sins are forgiven,' or to say 'Rise, take up your bed, and walk?' But that you may know the Son of Man has authority on earth to forgive sins'--he said to the paralytic--'I say to you, rise, pick up your mat, and go home.'" (Mark 2:9-11).

To the amazement of the crowds and the praise of God, the paralytic did just that.

When I asked Andy just a couple weeks ago to join us on the Nassau trip, I told him that was looking for a second male leader who could help me to focus the team on being sensitive to what God was doing throughout the trip. As it has turned out, that has indeed been Andy's most crucial role within the team, not least of all through his fall. While we were at the ER Tuesday night, our team and the two others were praying strong prayers for his recovery back at camp. He returned to camp that night to an entourage of our students and shouts of praise. And he rejoined us on the worksite on Thursday and Friday to the amazement of us all. Just like the paralytic, Andy's trip through the roof and his accompanying healing has been such that we "we're all amazed and glorified God saying, 'We never saw anything like this!'" (Mark 2:12).

A few days before our departure to Nassau, a friend and past leader of this trip said to me, "Remember that these kids need more than a lesson in social justice. You need to introduce them to a Person." Through the ups and downs of this week, and especially through Andy's bold faith, I believe each of my eighteen students have encountered Jesus in new ways.  Like the four men who were willing to do whatever it took to get their friend in front of Jesus, Andy's fall has gotten us all in front of Jesus.  The healing we have seen in points to the reality of a risen Christ who has authority to forgive their sin and who calls them to greater courage.

There are many more stories from this week that I'm excited to share. But as I sit with my friend in recovery--waiting for his very brave and gracious wife to arrive--I'm just grateful for the God who uses the most surprising and in some cases, even the most terrifying events to bring us face to face with Him.