Nassau 2012: All the sad things are coming untrue

On my much needed day off yesterday, I took some time to think and write and debrief.  I know from past years that this process often takes weeks, but I'm off to Portland with another team on Sunday--so I'm praying God will give me favor in decompressing everything quickly.

I had the opportunity to speak to the whole Mission Discovery group (our students and three other groups from around the country) on Thursday night during our evening service.  I always like to claim Thursday night because for most of the teams, the week is over at that point, and students have just said their heart-wrenching goodbyes.  {{of course, our team worked an extra day this year, so my own kids weren't quite in debriefing mode yet.}}  I love to talk to everyone at camp about the Kingdom that has already been initiated but that is not yet here in fullness.  I love to tell them that when they feel knocked backward by the need they see in Nassau, they need not lose heart!

For part one of this year's talk, I borrowed from a sermon I heard recently by Mike Erre, my friend Emme's pastor in California.  It's called "The Cross-Shaped World," and I've listened to it six times over the past couple of weeks--it is so beautiful!!  {Listen here.}  I explained that on the cross, Jesus turned a Roman torture symbol into the means by which we are saved.  Paul writes: "Having disarmed the powers and authorities, he made a public spectacle of them, triumphing over them by the cross" (Colossians 2:15).  I told the students that so often, we mistake the gospel for only the thing we teach to unbelievers--when really it's the hope we have for every part of life!  But, I shared with them that the cross isn't the end of the story.  If it were, we'd all be pretty hopeless.  But there is a Day that's coming when our great Savior will ride in on his white horse and save the day (Revelation 19)!  He will make everything new (Revelation 21).  We celebrated this reality with an Ecumenical (there was another non-denominational church, a Chinese church, and a Methodist church with us) communion service with orange juice and Cheese Nips.  It might have been the most boot-leg communion service ever, but it was beautiful, and God was there.

Here's what I'm wrestling with upon my return:

Sometimes I have a harder time believing in redemption for my students than for those broken Haitian kids.  Our lives are so cluttered, here in the States where we play it so safe.  The Haitian kids with their grubby hands and bruised, bare feet have treasures that my own kids do not.  They are rich by comparison--they see fully their own need, and they know what it is to have that need met by Grace.

I hope that as my students process what they have seen, they will not be the same.  But I know it's a bold hope because I see the reality in my own life.  Ms. Moxey and Anna's kids and Pastor and Madam Joseph keep on challenging me.  My heart is filled, I pray for them, seek ways to better their lives, wait for next year, repeat.  But in the meantime, I still shop at the same stores, still eat the same rich food, still prioritize travel and leisure, still clutter up my life.  {{What would it look like to let go of some of that?}}

And I feel hopeless for my students because if their thick-headed teacher doesn't even get it, how will they, these walking paradoxes who are all joy and selflessness one moment and all sass the next?  They are mirrors--the same stuff that's in them is in me too, only bigger and worse because I'm really old enough to know better.

"All the sad things are coming untrue," Tolkien writes.  And I have to remind myself: that goes for the Haitian kids and their empty tummies, but also for my students in the hurt they face stateside.

It's easy to look at the Haitian kids and see that they are oppressed, by a government and a people that does not want them, by the forces of poverty that keep them bound.


{{But my students and I--we are shackled up with all this stuff, with our safety and our comfort.}}

Those Haitian kids, in the immensity of their need, are closer to that Day that we are.  In their lacking, they can taste the abundance that is to come.  It feels far off to me, here in the States.  But in that little Haitian slum where God is so near, I can almost taste it too.


There's a land where our shackles turn to diamonds;
When we trade in our rags for a royal crown.
In that place our oppressors hold no power,
And the doors of the King are thrown wide!
Caedmon's Call, "Mother India" 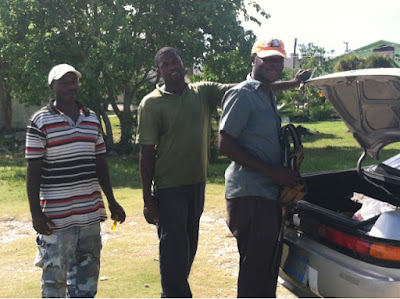 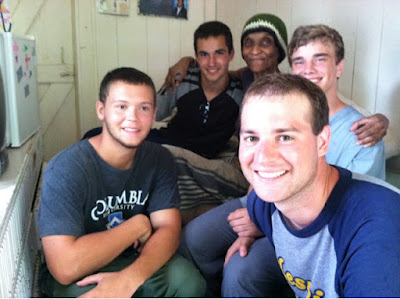 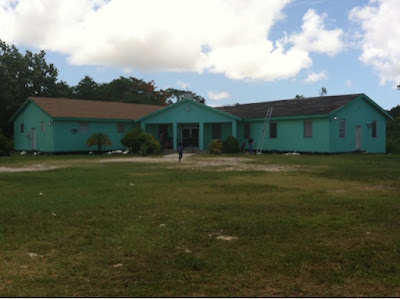 Posted by Chelsea at 7:38 AM No comments:

Not much time to write this morning, so I'll leave it at this: our hearts were pricked as we left the church yesterday--we who have held these hungry Haitian kids, wiped their little noses, and dried their big tears. I'm really proud of the team for how hard they worked this week, finishing a good chunk of the roofing project and giving 110% of their energy for the kids each day.

When the Mission Discovery staff asked us last night what we are "taking home" from Nassau, all I could think was that I am taking home 17 high school students-- who I hope have been changed forever because of this experience, who I hope will now take responsibility for the things they have seen.

I think we all shed some tears yesterday, and it feels a little funny to be transitioning into a beach/debrief day today...so pray for us that we'll continue to process, even as we head out this morning to unwind! 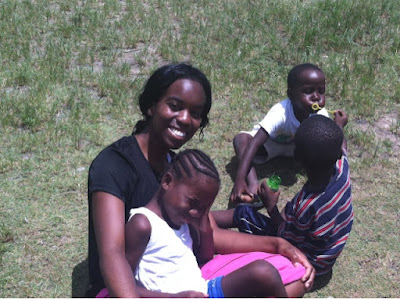 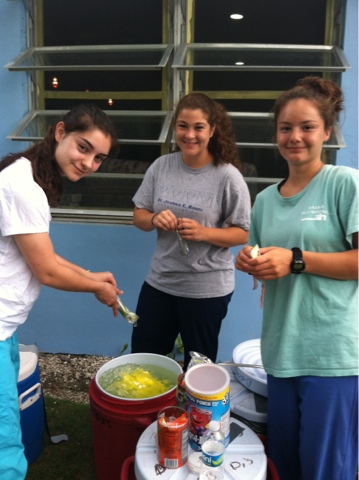 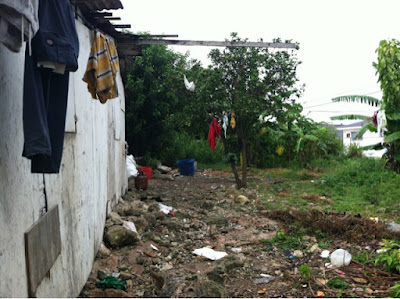 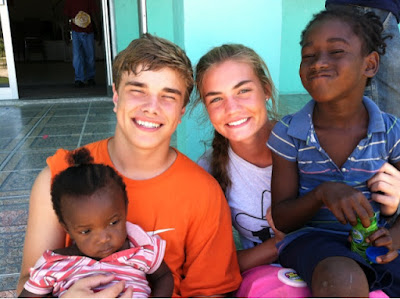 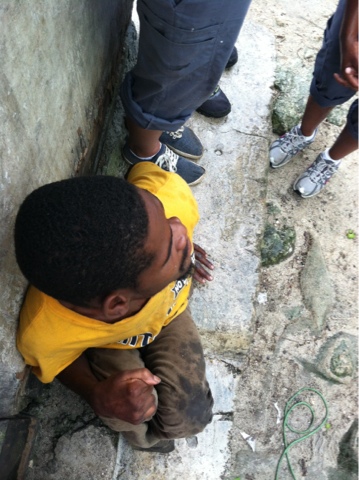 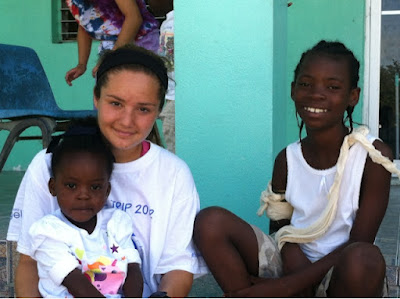 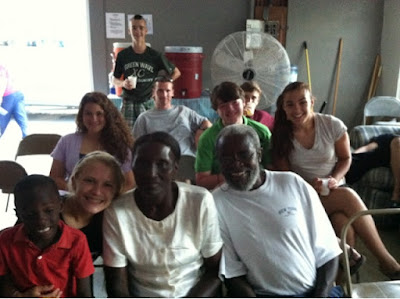 We've just finished day three in Nassau, and the team is doing great!  Wednesday and Thursday are always the toughest days on site {{we'll get a burst of energy on Friday, our last day!}}

Last night, one of the girls reported that CiCi had reminded her that God is at His strongest when we are at our weakest. Good words for today, since we had a rain storm that set us back a couple of hours on the roofing project and three students who were down for the count due to exhaustion! {{not to worry, parents: we pumped them full of Gatorade and they are feeling great today!}} Josie's favorite "God sighting" (as we call them here at camp) was when a precious little boy came and played nurse to her while she wasn't feeling so hot. As she was lying on chairs in the church sanctuary, he came and sang to her and stroked her hair! It was a really sweet moment, and I was able to catch the end on film.

It was awesome to see the students working so hard on the roof today, in spite of the fact that we were operating with a few men down. They are really getting the handle of shingling, and they worked their tails off today tearing off the next section of the old roof.

Here's the thing I'm learning about God (in Nassau and in life): He is close {{maybe closest!}} to the brokenhearted (Psalm 34:18), the hungry, the sick. On Tuesday and again yesterday, Kiara (one of the kids who lives near Anna, a Haitian woman in a neighboring village who's kids we've befriended over the years) was acting out. Both days, I wanted to understand why she was being grumpy. Our conversation went like this:

We've been able to share our peanut butter and jelly sandwiches with Kiara and the other kids from Anna's house the past couple of days, which is a joyful experience. But there is a heaviness in knowing that these kids we love are hungry so much of the time. I'm reminded that we serve a God who put on flesh to experience the worst of human suffering. He is the God who identifies with Kiara in her need, and He is putting all things right.

The team is excited to have two more days at Carmichael! Please keep praying that God would teach us much and accomplish much through us.


But He said to me, my grace is sufficient for you; my power is made perfect in weakness.  Therefore, I will boast all the more gladly about my weakness so that Christ's power may rest on me. That is why, for Christ's sake, I delight in weakness, in insults, in hardships, in persecutions, in difficulties.  For when I am weak, then I am strong.
2 Corinthians 12:9-10 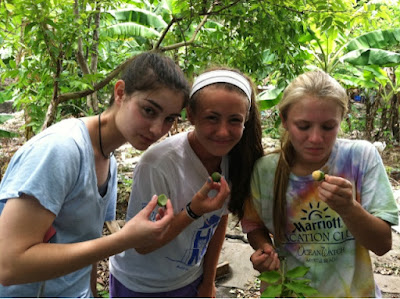 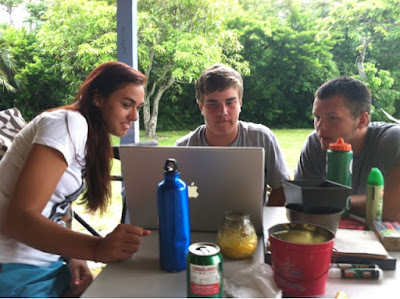 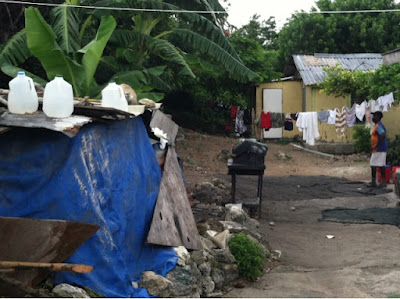 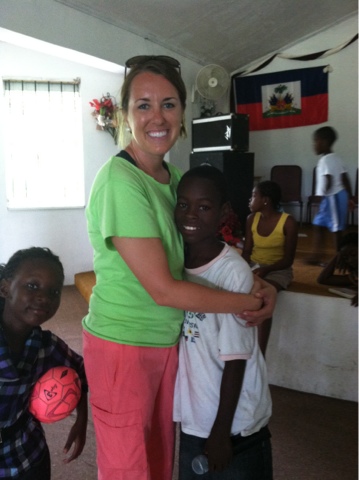 The morning before we left, I had breakfast with a student who came on the trip last year, and she asked me what I was most looking forward to.  I told her that as excited as I was to hold the Haitian babies and to be reunited with Pastor and Madam Joseph, the thing I love most about this trip every year is watching students experience it.

There is just nothing quite like seeing the sadness in their eyes as they look upon real poverty for the first time, or watching them wrestle with God as they try to understand how He can be loving and Good in the midst of such brokenness.  The joy on the Haitian kids' faces is priceless...but every bit as beautiful to me is the joy on my students' faces as they give the day's hundredth piggyback ride, swing a kid around in the air, or recognize that maybe it's not we in the States who know God best, but instead, the least of these.

We're reflecting as a team on the gospel this week--the truth that God created the world, that mankind sinned, corrupting the perfection of creation, and that God has come in the flesh to redeem it {{us!!}}.  But that's not all--He will come again to restore all things to himself, to put everything right fully and finally (Revelation 21).  That's the hope we have for the brokenness we see in Nassau this week.  In the midst of poverty and oppression, God calls us to image forth His own redemptive nature, to begin the work of restoration in the here-and-now.


He who oppresses the poor shows contempt for his Maker, but whoever is kind to the needy honors God.
Proverbs 14:31

Here are some pictures from our first day! 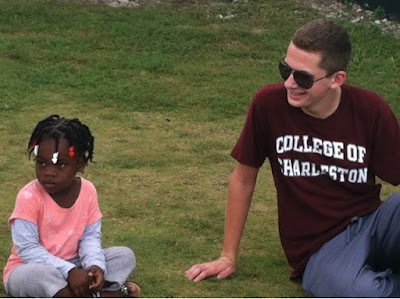 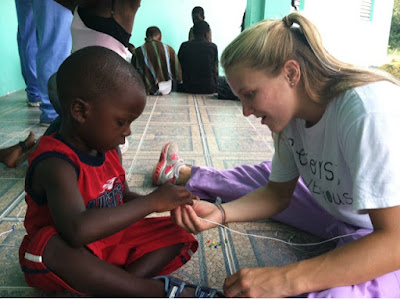 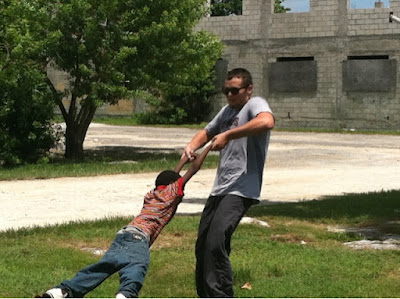 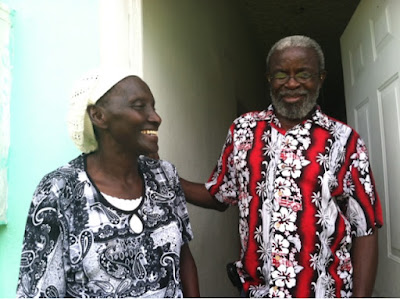 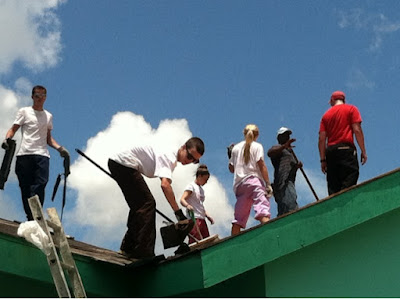 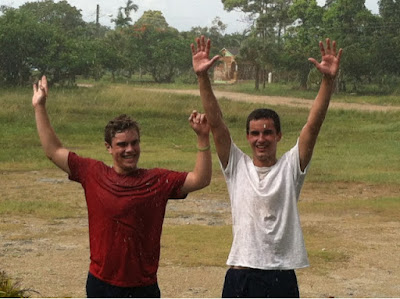